Let the games begin, this is our Glock 17 VS SIG Sauer P226 Review!

In 1984, the U.S. military asked gun manufacturers to place bids on an upcoming project. The armed forces were looking for a new service sidearm. SIG Sauer submitted their P226 model, which was an advanced model of the already-popular P220. The military ended up choosing the Berretta 92F over the SIG, though some units chose to go with the P226 in spite of Beretta getting the coveted government contract.

Is so happens that around that same time, the Austrian military and police were also looking for a gun to replace their older models. The Glock Company, who until that time had not dealt with real weapons manufacturing, submitted their Glock model 17 to the competition. Glock came out the winner, coming in first and passing some major names. Soon enough, Austrian forces were using the Glock 17. Use of the Glock spread quickly, and it took Europe by storm.

There are a lot of reasons to draw comparisons between these two very popular handguns, and this is an attempt to make things easier for those who are deliberating between the two. Ultimately, we each have personal preference and a different taste, different aesthetics, different grip, and what not, so this won’t be a “good vs bad” kind of deal. Both guns are great, hands down, whether for everyday carry or as a service weapon.

To get started, let’s do a quick side by side comparison. This list doesn’t cover every aspect of these firearms, but it should give you an idea of their technical specifications.

So, those are the rough numbers. Both of them are full-size, service-type handguns. The SIG Sauer’s width is significantly wider, and some people see that as an issue.

The Similarities Only Go So Far 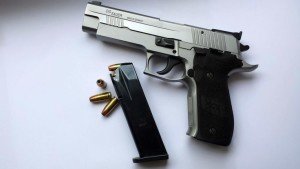 Both guns can handle the recoil of a 9mm round. They both have a safety system made up of several internal mechanisms (more on those soon). These are comparable, yet very different, and you can see that from the get go. The Glock is polymer-2 based, while the SIG is made mostly of steel. The Glock 17 is significantly cheaper than the SIG Sauer (although this is not specific to the P226). The manufacturer suggested retail price for these gun is around $500 for a new Glock, and $900 or $1000 for a new SIG Sauer.

Both of these handguns are tough and reliable. Again, it very much depends on personal preference, grip size, and – in some cases – concealability. Both are chambered in 9mm, and the P226 has the advantage of being chambered in different calibers. There are over 20 different models of P226 currently being produced and sold, whereas the Glock 17 is limited to Gen2, Gen3, or Gen4 models. Much like the Glock 19, the most popular Glock 17 generations are probably Gen3 and Gen4. 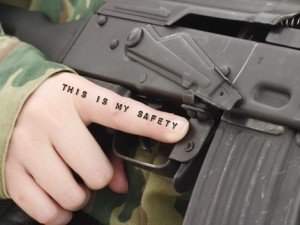 These guns also differ on safety mechanisms. Neither one of them has an external safety switch on the gun itself, but instead they both make use of an elaborate system of internal safeties, in order to guarantee (to the best of the manufacturer’s ability) that no accidental discharge occurs.

The SIG Sauer P226 has what is called the 4-point safety system ( It’s found on all it’s models like the P229 and P228), while the Glock employs a Safe Action system. Both systems are highly effective, include a drop safety, and have the ability to prevent any unwanted or accidental discharge. The only way a bullet is coming out of that barrel is if the shooter pulls the trigger.

Still, there are some crucial differences in the safety mechanisms of these two guns. With the Glock, once you rack the slide, the only way to de-cock the weapon is by pulling the trigger. That means that if you want to be in a “ready to shoot” position, you need to walk around with a cocked gun. The SIG Sauer, on the other hand, allows the shooter to safely lower the hammer while there is still a round in the chamber.

Personal Experience And The Bottom Line

Let’s take a look at some “bottom line” stats, based on personal experience:

Accuracy – both are very accurate, and if you are talking combat accuracy it is a tie. In a range setting, though, the SIG has some advantage for me over the Glock.

Weight – the Glock is lighter. If you are going to be carrying this on you, open or concealed, weight is definitely something to consider. Polymer versus steel.

Grip – perhaps the most subjective item on this list, since it literally varies by hand size and shape. The SIG fits my hand better, but your hand’s mileage may very well vary. 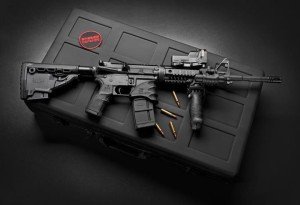 Customization – both guns are very customizable, but the Glock does seem to offer more aftermarket accessories and parts than the SIG. One user, writing on the SIG gun forums, stated that for him a Glock 17 is like a Harley-Davidson which can be customized, while the SIG is like a Ferrari which already comes with everything you need.

Appearance – for some, firearm aesthetics matter a great deal. They want a gun which looks as good as it shoots. The SIG probably has the advantage here. It looks nicer, overall.

Before making any decision, it is best to try both guns. See what fits in your hand, see how you handle both weapons, and see which one feels more natural to you. There is a good chance that once you try them both out, you will form an opinion that will make your decision easier. Or, you can rid yourself of the question altogether, by purchasing both handguns.